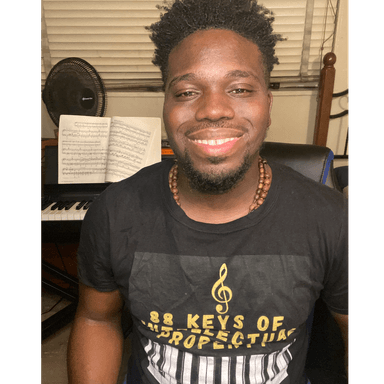 CLIFFORD C JONES was born on December 14th, 1987. At the age of eight, Clifford discovered a love for music. Every Sunday, he would attend church services, where he attempted to replay everything he heard. At the age of 14, a coworker at his first summer job began to teach him how to play beginner chords on a piano. The following fall in 10th grade (Evander Childs Highschool), Clifford took a music appreciation class where he learned the basics of music and how to play the 1st Movement of Beethoven’s Moonlight Sonata (Opus 27 no. 2). Upon completion of the class, Clifford began listening to Ludwig von Beethoven, Johann Sebastian Bach, Wolfgang Amadeus Mozart, Fredrick Chopin, and FRANZ LISZT. These artists inspired Clifford not only to teach himself but also to compose his piano music for three years. At the age of 16, Clifford’s Grandmother, Millicent Woodley, bought him a piano, which fueled his hunger and love for music and ended up enrolling at the Harlem School of the Arts (HSA). In his first lesson, the teacher was astounded by Clifford’s abilities and quickly realized she wouldn’t be able to teach him. She referred him to one of the best teachers and pianists at the school Ms. Tsyala Khudad-zade (Ms. Delilah). For the next eight years (17-25 years old) under her strict and loving tutelage, Clifford developed as a classical pianist and grew into the person he is today. The parallels between learning music and growing into a man were evident. During this period, Clifford was able to perform at various functions representing HSA. One of his most significant accomplishments was being able to perform at the world-famous Apollo Theater for an HSA fundraiser. On June 26th, 2017, Clifford put on his first solo piano recital at his home church St. Margaret’s Episcopal Church, located in Bronx, NY. Performing some of the most challenging works by Chopin, Liszt, Beethoven, and others, he was able to fulfill his lifelong dream, to put on his concert. Currently, Clifford Jones is a piano teacher, and founder of the 88 Keys of Intellectual Property. For the past six years, his accomplishments include piano teacher, accompanist, and producer at the HSA. His continued dedication to reach children of all ages will continue to grow as well as performing the works of some of his favorite composers.

Hello world! Have you ever been interested in taking piano lessons, or further your piano training? Maybe you played years ago and are interested in getting back to it? Well I’m here for you lol! My name is Cliff Jones. I am the owner of the 88 Keys of Intellectual Property. The 88 Keys Of Intellectual Property (88 KIP) is an online based piano school. I teach students as young as 3 years old all the way to 80. It doesn’t matter if you’re new to piano, or you haven’t played in years, or if you’re advanced. I teach any and everyone at an affordable rate. For more information head to my website.