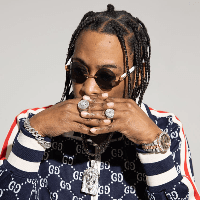 Dizzle JA Bertony “Dizzle JA” Reynolds has been blessed with the talent to perform, write and record music; you could say it was an innate talent from the creator himself. Dizzle JA strongly believes in his motto “work hard, never give up and you will achieve your goal.” Born in St. Mary, Jamaica Dizzle JA and his mother later moved to the beautiful parish of St. Thomas when he was just a toddler. From very early on, he started displaying his talent as a performer; he would dance the legendary Michael Jackson songs for his mom and her friends. The La-Fam general as his friends call him attended the Yallahs Basic School then he moved on to Yallahs Primary School; there he was very active in sports such as soccer, track and field, cricket etc. He vividly remembers his childhood days then you could find him singing at school concerts and in the class rooms for his peers. He would move on to Morant Bay High School, that's when he had the thought of becoming an entertainer. The moulding of a great star started when Dizzle JA and his friends formed a group call U.W.K and would perform at the school major concerts and class parties. Unfortunately the alliance did not work out so Dizzle JA put music on pause and went to work but the desire to pursue music never left him. In 2007 Dizzle JA formed a record label called La-Fam Entertainment JA which consists of artistes, Djs, dancers etc. Dizzle JA learnt the music business and eventually took on the title of promoter, which led him to work with a lot of major dancehall and reggae artistes and was awarded twice for the prestigious Pool Party Sunday’s event. Dizzle JA is now located in Hollywood California where he has been recording and promoting his music. The creative genius has also learnt a few things about the movie industry; he has been featured in multiple movies and sound tracks. The La-Fam Entertainment JA label and major Hip-Hop music label Financhill Records has teamed up for a couple projects to come. Dizzle JA has release a few albums worldwide. His latest projects are called Dancehall Meets Trap ,Benzion , 2000 x 2020 is available for purchase on iTunes. The recording artiste has had the pleasure of performing at Sting the greatest one night show, Kingston jamboree and more. Bookings: [email protected] Facebook:dizzleja Twitter: dizzleja Instagram: dizzleja Soundcloud: dizzleja YouTube: dizzle ja