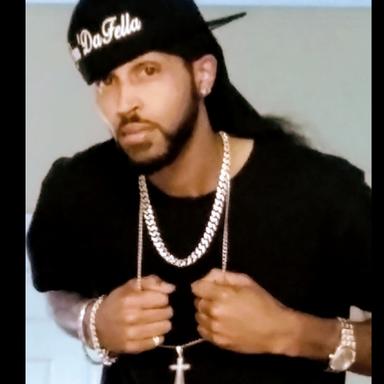 Independent artist, singer, songwriter, producer, and rapper Hym'DaFella was Born in Long Branch, NJ. As a child growing up living in poverty, he and his siblings moved around from state to state with his mother who came to the states from Trinidad. Living in North Carolina at a young age he began to write poetry. Not knowing writing would be his career, he began to become more creative with the art. By the age of 9 he wrote his first song. Going through middle school and high school, he participated in school activities such as sports and the band. Hym'DaFella learned at a young age to play the piano by ear. Listening to some of his favorite artist as a child, he was inspired to become his own artist. Joining the band in middle school he learned to play the trumpet and the alto saxophone reading music to later on becoming a music producer. As the years past being inspired by great writers, Hym'DaFella started toward his journey to becoming the artist he is today. He has now written over hundreds of songs, produced over hundreds of beats, and has gotten to perform in many venues across the country. Hym'DaFella has opened up shows for mainstream artist such as: Angie Stone, Dave Hollister, Young Jeezy, Lil Jon, Carl Thomas, Marques Houston, and many more. Hym'DaFella has worked with Badboy South’s very own comedian Dennis Clark, the Legendary BB King’s daughter Claudette Robinson King , and the cousin of rap legend 2pac Shakur Revelation. Hym'DaFella now has music available on all streaming platforms such as Spotify, Apple Music, Deezer, Youtube, and more. You can find him on social media such as Facebook, Instagram, Twitter, Tik Toc, Snapchat, and Triller. Hym'DaFella continues to journey as an artist hoping to one day be able to work with some of his inspirational figures such as: T.I., Chris Brown, Ne-Yo, Trey Songz, T-Pain, Dj Khaled, Jay-Z, Nas, Usher, Eric Bellinger, Beyonce, Ella Mai, Keyshia Cole, Mary J, K. Michelle, Missy Elliott, Khalani, Sevyn Street, Roddy Rich, and so on. Continuing to reaching his dreams and goals, Hym'DaFella quotes “I just want to be able to be a great father to my daughter who lost her mother and my son who lives with his mother.” He also replied, “With God I can do all things because, it is he who strengthens me.” Outside of the entertainment world Hym'DaFella says he would like to one day open a youth center for teenagers and also open a restaurant that he has a brilliant idea for. Hym'DaFella is very multi talented and hopes to be able to share his vision of things to people all over the world.