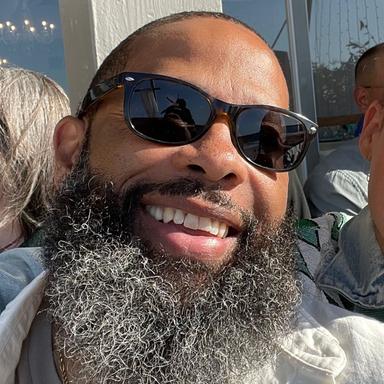 ...is a native of Philadelphia and he currently teaches Film at Valley Oaks Center for Enriched Studies Magnet (V.O.C.E.S) in San Fernando Valley of Los Angeles. He graduated with a B.A. in English/Theatre Arts from the Historically Black College Norfolk State University and received a Master's of Education in Cross Cultural Teaching from National University. Jamal is currently building “Clear Vision Studios” at VOCES. A full comprehensive, multi-million dollar state of the art Film Studio on the school campus to certify and train students and adults in the Film Industry. His fully developed relationship and program, with Walt Disney Feature Animation Studios, educates students in the business of animation. Jamal has already built and designed “Studio 24”, a fully functional mini-soundstage in one of his classrooms for his film students. He currently received a $3 million re-modification grant from the state of California to build “Clear Vision Studios Lab”. A fully functional state of the art Dolby Atmos Certified ADR Studio, Dolby Atmos Certified 50 seat Screening Theatre and a Apple post-production editing lab for his Film students. Mr. Speakes is also a Filmmaker. He teaches cinematography with a cohort of professionals in Lagos, Nigeria, with the Del York International Creative Film Academy. He loves the opportunity to develop the cognition of young adult's minds and preparing them to compete in the educational society.