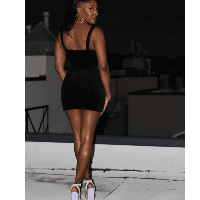 Khalimah Gaston hails from Jamaica, Queens, but currently resides in LA. She honed her passion with formal training in Film and Theater at The New York Conservatory for Dramatic Arts (NYCDA). Since then, she's done a variety of work such as Off Broadway plays in NYC, commercials, voice overs, web series, and films. She hosts her own events, produces content and of course ACTS. Check her out on Tyler Perry’s Ruthless. She has been driven by her passion for the performing arts from a young age. She also created the premier networking event Screening Room Atl which has become a staple for the Atlanta film community. Actors and film makers from all over and of all caliber come to display their work amongst their peers on Wednesdays over the last 4 years . After moving to LA she also added Screening Room LA to her endeavors. Instagram: @TheScreeningRoomAtl @ScreeningroomLA @Khalimahofficial Website: www.TheScreeningRoomAtl.com www.khalimahgaston.com Repped by BYSB Talent RBJ Management

Welcome to Her world

Welcome to her IG