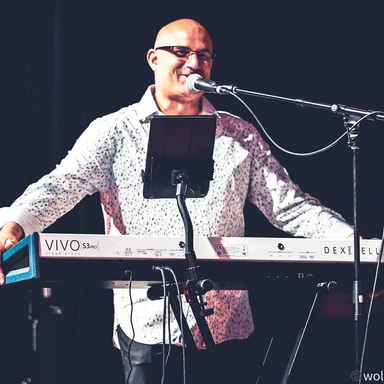 Leonardo Garcia y Son Horizonte is an ensemble that was formed over 10 years ago to explore a wide variety of original compositions in Latin Jazz, original arrangements, and a wide variety of Salsa and Salsa Jazz; from the classics (salsa dura), including original salsa music of the band. Leonardo and the band has been diving into its own productions and creations, along with songs from other members of the group, in the spirit of collaboration, to bring musical flare to the Salsa and Latin Jazz genre. Leonardo was nominated and won the Hollywood Music in Media Awards (HMMA) in November 2018 for the Latin category. Dominque Patrick Noel's composition titled Desde Que Te Conoci, one of the percussionists in the group, was nominated for HMMA November 2019. Leonardo was nominated and won the 2019 FOX Music Awards (Premios Fox Music USA), and winner of the IntercontinentalMusicAwards in 2020 for Best Salsa Leonardo and the band maintains a busy schedule recording a wide variety of projects; singles and albums. Leonardo released a Latin Jazz album in March 2018 and a salsa album titled Doce in March 2019. July 2020- released a salsa album titled Remembranzas November 2020- released The Christmas Medley Leonardo expects to release another salsa album in March 2021 along with a Latin Jazz album summer 2021 Here are just a few of the highlights of performances of recent years- The band has performed and accompanied many vocal guest artists over the years, recently Tito Puente Jr., Melina Leon May 2019, Aug 2019 Johnny Love and Van Lester For the past 6+ years they have performed at The Richmond Salsa & Latin Jazz Festival. 2020- commencing in February, performing monthly at Maximon in Baltimore, Md. Jan 2020- NAMMShow in Anaheim, CA 2019 Art on the Avenue festival; Alexandria, Va.