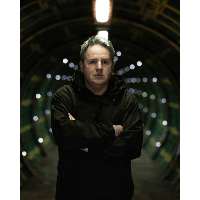 Belfast born artist/dj/producer Linear B has more than 15 years experience under his belt and in that time has brought plenty of vitality to the sharp end of techno. He has a passion for synths and stripped back drum grooves but always moves forwards and evolves with each new record. Spoken word snippets, found sounds and plenty more also get mixed into his music with releases on labels such as Detone in both EP and LP format, tracks included are “Catching comets” and “Able archer” His first ever release came out on Orient records in 2005 with a track called “shaker shaker” since then he has been working on a series of studio albums which he is currently releasing on his own Rainbow tipi imprint the first of which is an Ep called “Run sun” and includes “from the top down” the second release on Rainbow Tipi is “The Boge” which includes “Saved face” Dj’s including Laurent Garnier, Truncate and Mr Ties have heaped praise on his productions and his offerings of deep and hypnotic nature, the press reviews of this Ep are as such: an excellent opener ‘The Boge’ immediately gets your attention with its bristling clasp and frazzled synth line building to a tense peak. Sci-fi melodies and heavyweight kicks power along this futuristic techno roller and take you into another dimension. The excellent ‘Saved face’ is edgy and unsettling, with paranoid synth stabs keeping you guessing as a turbulent baseline brings further drama. It’s a dystopian techno track designed to evoke real suspense. This is another assured and forward thinking techno offering from a seasoned talent, The third released on Rainbow tipi is a tribute to his late mother, this Ep is more on the progressive house tip which is called “Our Eva” includes “Blue angel” and “San fran dave” all of which encapsulate emotive moments and include spoken poetry by Linear B and sung harmonies over a choir samples taken from a live recording of the Liverpool cathedral choir in rehearsal, the forth Ep released on Rainbow tipi is Linear B moving back to his deep dark techno routes with “Charon’s crossing” “Ghost walk” and “Cobalt for the masses” all of which again include spoken and sung harmonies by Linear B, there’s currently so much unreleased music by Linear B there seems to be no end of inspiration from subject matter, he’s always striving forward with his new productions,more will be revealed in the coming months and years.

The warning Ep by Dj Bear….beatport

Klubikon review of “The journeyman”