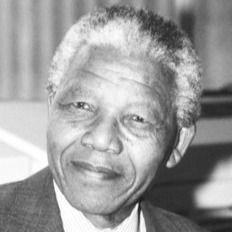 Mandela was an influential South African political leader. Nelson Mandela was born on July 18th, 1918 in Mvezo, South Africa. Mandela joined the African National Congress in 1944. On October 9th, 1963, 11 people including Mandela were on trial for sabotage in the "Rivonia Trial." On June 11th, 1964 Mandela was accused as guilty and was put in Prison. He was released from prison on February 11th, 1990. Mandela won the Nobel Peace Prize in 1993. He ran for president of South Africa. He was inaugurated on May 10th, 1994 and became South Africa's first democratically elected president. Mandela stepped down in 1999. He died on December 5th, 2013.

Nelson Mandela: A Leader for Freedom

Some Other Pages to Check Out