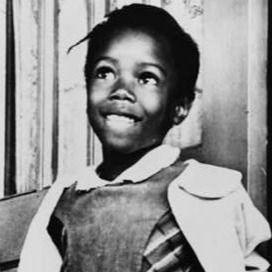 Born on September 8, 1954, Bridges was the oldest of five children for Lucille and Abon Bridges, farmers in Tylertown, Mississippi. When Ruby was two years old, her parents moved their family to New Orleans, Louisiana in search of better work opportunities. In 1959, Ruby attended a segregated New Orleans kindergarten. A year later, however, a federal court ordered Louisiana to desegregate. The school district created entrance exams for African American students to see whether they could compete academically at the all-white school. Ruby and five other students passed the exam. Her parents were torn about whether to let her attend the all-white William Frantz Elementary School, a few blocks from their home. Her father resisted, fearing for his daughter’s safety; her mother, however, wanted Ruby to have the educational opportunities that her parents had been denied. The school district dragged its feet, delaying her admittance until November 14. Two of the other students decided not to leave their school at all; the other three were sent to the all-white McDonough Elementary School. Ruby and her mother were escorted by four federal marshals to the school every day that year. She walked past crowds screaming vicious slurs at her. Undeterred, she later said she only became frightened when she saw a woman holding a black baby doll in a coffin. She spent her first day in the principal’s office due to the chaos created as angry white parents pulled their children from school. Barbara Henry, a white Boston native, was the only teacher willing to accept Ruby, and all year, she was a class of one. Ruby ate lunch alone and sometimes played with her teacher at recess, but she never missed a day of school that year.

The Story of Ruby Bridges