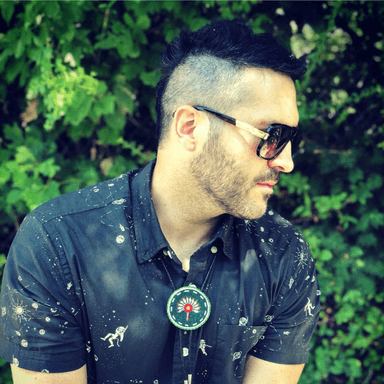 Whisperhawk (Michael Gross) has been a mainstay in the Utah music scene since the early 2000's. Gross got his start with the indie rock band The Brobecks who were making waves in the indie rock scene and were dubbed a "buzz band" and "band to watch" by many national music publications until his departure in 2007. Since then Gross has been involved with various bands and music projects and in 2010 signed a music licensing deal with Bleed 101 in Los Angeles. His music has appeared in film and on various television networks including ABC, NBC, CBS, MTV, FOX and the FX networks. Whisperhawk is Gross' latest project which combines his knack for melodies with a high-desert folk/rock spirit. Many of Whisperhawk’s songs are a social commentary, and can have Native American themes as Gross himself is a member of the Northwestern Band of the Shoshone Nation. With much experience and many recordings to his credit, Whisperhawk seeks to branch out and share his brand of songwriting with the entire universe.