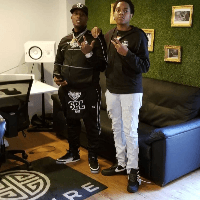 Musical artist Young S.H.O, aka Shannon Deonte Collins, is a man with both a plan and a dream that began in childhood. Having begun singing and playing the drums as a kindergartner, the Johnston, SC native went on to start his first rap group, MOB, at the age of 11 and by age 17, entered the larger stage as part of Called M80. Together, they recorded “80 Wave,”“Born G,” “Real to My Nature,” “80 Branches,” and “80 Branches 2 and 8 Reloaded.” When Called M80 parted ways, Young S.H.O went solo as SPL Entertainment, dropping his first album, Zyian (containing the hit singles “Sill Azz” and “Scoota Scoot”) in 2017. As the album title implies, the hip-hop artist was enjoying an evolving career based on aspiration, inspiration, hope and creativity.